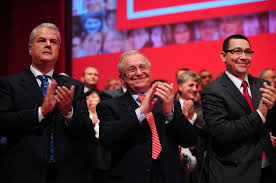 Nietzsche and the Current European Crisis

130 years ago, Friedrich Nietzsche on Europe’a fatefullly fractured future: “Thanks to the pathological alienation which the nationalistic idiocy has established and still establishes among European peoples, thanks as well to the short-sighted politicians with hasty hands who are on the top today with the help of this idiocy and have no sense of how the politics of disintegration which they carry on can necessarily only be politics of intermission, thanks to all this and to …some things today which are quite impossible to utter, now the most unambiguous signs that Europe wants to become a unity are being overlooked or wilfully and mendaciously reinterpreted.” (“Beyond Good and Evil,” 1886). This passage is one of the three epigraphs to the volume “Messages from a Lost World: Europe on the Brink,” by Stefan Zweig, Foreword by John Gray, Pushkin Press, 2016.

Comments Off on Nietzsche and the Current European Crisis |

I offer here a brief operational definition which I first put forward in a text titled “The politics of charismatic protest” which came out several years ago, together with pieces by Marc Howard and Cas Mudde, in the quarterly “East European Politics and Societies.”

Populism is a political strategy meant to generate mass mobilization and enthusiastic support for a leader and a party (or movement) among heterogeneous social groups by opposing the established political arrangements and pledging their fundamental regeneration, often at the expense of minority and human rights and liberties, social, economic, and political life.

Comments Off on What is populism? |

From Benito Mussolini and Juan Domingo Peron to Hugo Chavez, Marine LePen, and Donald Trump, populist mountebanks have exploited popular fears, uncertainties, neuroses. None of these anxieties van…ished under the populist regimes. On the contrary, they exacerbated. Populism is a secular chilasm, it promises salvation hic et numc. In this respect, charismatic populism, Trump-style, is a form of fundamentalism. It indulges in cheap fantasies and turns citizens into subjects of abject manipulations. It does not recoli from blatant lies. On the contrary, it despises truth and cultivates illusions.

Populism is rooted in the myth of le bon sauvage, it exalts an uncorrupted, idealized “people” and demonizes the “soulless plutocrats” and the “rootless cosmopolitans.” In Hungary, the populists abhor Budapest (“Judapest”), in the US they detest New York, the East Coast etc The paleo-symbolic infrastructure of populism is a purifying utopia…

Comments Off on Lessons from Brexit |

Václav Havel’s address to the European Parliament, Strasbourg, March 8, 1994. “I have come from a land that did not enjoy freedom and democracy for almost sixty years. You will perhaps believe me when I say that it is this historical experience that has allowed me to respond at the deepest level to the revolutionary meaning of European integration today. And perhaps you will believe me when I say that the very depth of that experience compels me to …express concern for the proper outcome of this process and to consider ways to strengthen it and make it irreversible. Allow me, in conclusion, to thank you for approving the Europe Agreement on the association of the Czech Republic with the European Union two weeks after it was signed. In doing so, you have shown that you are not indifferent to the fate of my country.”

Comments Off on Memory, awareness, vision |

Contemporary East-Central Europe, in particular Romania’s Parliament: “The one pervading evil of democracy is the tyranny of the majority, or rather of that party, not always the majority, that succeeds, by force or fraud, in carrying elections.” Lord Acton— The History of Freedom in Antiquity, 1877

On his FB page, political scientist Marius Stan publishes a picture with two major students of totalitarianism, Hannah Arendt and Sigmund Neumann, accompanied by an excellent commentary: “Neumann’s groundbreaking book “Permanent Revolution: The Total State in a World War” (1942) deals with the structural framework which distinguishes modern dictatorship from the 19th century state. He was among the first scholars to discuss the role and the figure of the political lieutenant (or, in his own words, “the forgotten man”). SN was fully committed to the comparative study of politics (His credo: “To know thyself, compare thyself to others.”)  Nowadays, the city of Dresden, this powerful symbol of destruction and war, has the privilege to host two important institutions: Hannah Arendt Institute for the Research on Totalitarianism & Sigmund Neumann Institute for the Research on Freedom and Democracy. Neumann tackled the concept of “totalitarianism” quite early (“always on a march that never ends, incessantly at war with a world that it can not possess,” therefore its character of “permanent revolution”), Arendt added a much needed philosophical touch and turned it into a key-concept for the modern political science…”

I mourn here here the loss of a dear friend, historian and public intellectual Mihnea Berindei (1948-2016). I have known Mihnea since 1985, we have been involved in numerous anti-totalitarian activities. He was the soul of the democratic exile in Paris, closely linked to Soviet and East European dissident circles. He invited me to contribute to journals such as “La nouvelle alternative” and “L’autre Europe.” He organized solidarity campaigns with Paul Goma, Vasile Paraschiv, Doina Cornea, Mihai Botez, Radu Filipescu, Dorin Tudoran and other dissidents. He arrived in Bucharest immediately after the fall of the Ceausescu regime and participated in the creation of the Group for Social Dialogue and its weekly, “22.” He co-authored an impressively documented and immensely illuminating book about the June 1990 state-backed violent repression of Romania’s emerging civil society. In 2006, Mihnea served as a member of the Presidential Commission for the Analysis of the Communist Dictatorship in Romania. Words cannot describe his total commitment to the writing of the Final Report.

A few years ago, in Paris, Mihnea accompanied Horia Patapievici, Mircea Mihaies, and me to Monica Lovinescu’s and Virgil Ierinca’s house on Rure Francois Pinton. Graciously, he gave us permission to choose, each of us, one book from the late couple’s legendary library. I chose Boris Souvarine’s “Staline” with Monica’s annotations. Two features merged in Mihnea’s marvelous personality: noblesse and largesse. I was the beneficiary of both. In May 2012, when the ten PM Victor Ponta fired Ionan Stanomir and me from the leadership of the Institute the Investigation of the Crimes of Communism, Mihnea resigned from the Sceintific Board, together with all the other members. Mary Sladek and me extend our deepest sympathy to Catherine and Vlad. Mihnea Berindei’s name belongs to the history of honor in Romania. May he rest in peace!

On Father’s Day, for Horia Patapievici

Forgotten We Shall Be (El olvido que seremos). By Héctor Abad Faciolince

In the house lived ten women, one boy, and a man. The women were Tatá, who had been my grandmother’s nanny, who was almost a hundred years old, partially deaf and practically blind; two girls who did the cooking and cleaning—Emma and Teresa—my five sisters: Maryluz, Clara, Eva, Marta, Sol; my mother; and a nun. The boy, me, loved the man, his father, above all things. He loved him more than God. One day I had to choose between God and my dad, and I chose my dad. It was the first theological disagreement of my life and I had it with Sister Josefa, the nun who looked after Sol and me, the two youngest. If I close my eyes I can still hear her harsh, thick voice clashing with my childish one. It was a bright morning and we were out in the sun in the courtyard, watching the hummingbirds doing their rounds of the flowers. Out of the blue, the Sister said to me:

“Your father is going to go to hell.”

“Because he doesn’t attend mass.”

“You’re going to go to heaven, because you pray with me every night.”

In the evenings, while she got undressed behind the folding screen with the embroidered unicorns, we said Hail Marys and the Lord’s Prayer. At the end, before going to sleep we recited the Creed: “I believe in God, the Father Almighty, Creator of Heaven and Earth, and of all things visible and invisible . . .” She took off her habit behind the screen so we wouldn’t see her hair; she’d warned us that seeing a nun’s hair was a mortal sin. I, who understand things well, but slowly, had spent the whole day imagining myself in heaven without my father (I was leaning out a window in paradise and I could see him down below, pleading for help as he burned in the flames of hell), and that night, when she began to recite the prayers from behind the unicorn screen, I said:

“I’m not going to pray anymore.”

“No. I don’t want to go to heaven anymore. I don’t like heaven if my daddy’s not going to be there. I’d rather go to hell with him.”

Sister Josefa leaned around the screen (it was the only time we saw her without her veil, that is, the only time we committed the mortal sin of seeing her messy, unattractive hair) and shouted: “Hush!” Then she crossed herself.

I loved my father with a love I never felt again until my own children were born. When I had them I recognized it, because it is an equally intense love, although different, and in a certain sense its opposite. I felt that nothing could happen to me if I was with my father. And I feel that nothing can happen to my children if they are with me. That is, I know that I would give up my own life, without a moment’s hesitation, to defend my children. And I know my father would have given his life, without a moment’s hesitation, to defend me. The most unbearable idea in my childhood was imagining that my father might die, and so I had resolved to throw myself into the River Medellín if he died. And I also know there is something that would be much worse than my own death: the death of one of my children. All this is a very primitive, ancestral thing, which one feels in the deepest depths of consciousness, in a place that precedes thought. It is something one does not think, but which simply is, without any mitigating factors, for it is something one knows not with the head but with the gut.

I loved my father with an animal love. I liked his smell, and also the memory of his smell, on the bed, when he was away on a trip, and I would beg the maids and my mother not to change the sheets or the pillowcase. I liked his voice, I liked his hands, his immaculate clothes and the meticulous cleanliness of his body. When I was afraid, during the night, I would go to his bed and he would always make space for me at his side to lie down. He never said no to me. My mother protested, she said he was spoiling me, but my father moved over to the edge of the mattress and let me stay. I felt for my father the same way my friends said they felt about their mothers. I smelled my father’s scent, put an arm across him, stuck my thumb in my mouth, and slept soundly until the sound of horses’ hooves and the jangling of the milk cart announced the dawn.

Comments Off on On Father’s Day, for Horia Patapievici |