Many happy returns with joy and good luck, dearest Adam!

He embodies brilliantly three gifts: the gift of friendship, the gift of love, and the gift of wisdom. Happy Birthday to Andrei Pleșu, a noble citizen of the European Republic of Letters!

Image: Launching my book “Fantasies of Salvation” at the Embassy of Romania, Washington, DC, November 1998.

Re-reading “Darkness at Noon” on August 21: “An inscription came into his mind which he had read on the gateway at the cemetery at Errancis where Saint-Just, Robespierre and their sixteen beheaded comrades lay buried. It consisted of one word: Dormir–to sleep.”

Comments Off on Darkness at Noon, August 21… |

: On August 21, 1940, one year after the Nazi-Soviet Pact, the Catalan communist agent Ramón Mercader assassinated Leon (Lev) Davidovich Trotsky, Stalin’s nemesis. To carry out Stalin’s order, Mercader hit Trotky in the skull with an icepick. The Old Bolshevik fought back with desperate energy. He passed away one day later in a Mexico City hospital. Mercader was arrrested and sentenced to 25 years in jail. He secrelty received the Lenin Order and… the title of Hero of the Soviet Union for services to the revolutionary cause. Mercader died, age 65, in Havana in October 1978. Altogether, a lurid story of crimes, deceptions, betrayals, manipulations, misplaced ardor, plundered illusions, espionage, hopelessness, and moral decay…

Image: The definitive Mercader biography that I bought in Barcelona in June 2015

Comments Off on Stalin’s Willing Executioner |

What Charlottesville is about…

I’m the last person to condone far left violence. I’m unequivocally opposed to any extra-legal forms of rebellion (I don’t regard totalitarian decrees, abusively and arbitrarily humiliating, as laws). I admire Thoreau, but I think that civil disobedience ought to be civilian (with bold characters), i.e., non violent, decent, civilized. I detest Molotov, in any of his incarnations: as the man who signed the infamous pact and as a “revolutionary” …cocktail. My admiration for the whole civil society strategy that triumphed in Eastern Europe during the annus mirabilis 1989 is precisely rooted in this philosophical engagement. But I need to say it emphatically: Charlottesville is the name of far right (alt right, as it were) jingoism, racism, anti-Semitism, white resentment, lumpen malaise, in short updated, Americanized Fascism. I just read a great essay by Mary McCarthy titled “Hannah Arendt and Politics.” It reminded me that during Senator McCarthy’s vicious witchhunts, Hannah Arendt considered returning to Europe, becoming a refugee for the second time in her life. Neither she nor her husband were directly targeted, but they felt that America was running amok. For me, 45’s conduct is just latter day McCarthyism…

Comments Off on What Charlottesville is about… |

Comments Off on Barcelona, mi amor… |

Minima moralia: “August 14, 1982. Dear Olga, Orientation toward Being as a state of mind can also be understood as faith: a person oriented toward Being intrinsically believes in life, in the world, in morality, in the meaning of things, and in himself. His relationship to life is informed by hope, wonder, humility, and a spontaneous respect for its mysteries. He does not judge the meaning of his efforts merely by their manifest successes, but first of all by their ‘worth in themselves’ (i.e., their worth against the background of the absolute horizon).”– Václav Havel, “Letters to Olga,” 1982

Comments Off on Hope, wonder, humility… |

They were all burnt by the unsparingly cruel sun of the Revolution, the Piatnitskys, the Radeks, the Bukharins, the Yakirs, the Redenses and Svanidzes (Stalin’s in-laws), the Litvinovs, the Tukhachevskys, the Rakovskys, and countless others. Fully deserved congratulations to Berkeley historian Yury Slezkine for this formidable accomplishment! An apocryphal story claims that, during the Great Terror, the genialissimo generalissimo used to watch from his o…ffice in the Kremlin how the lights turned on and off in the House on the Embankment–the title of a semi-autobiographical novella by Yuri Trifonov. In a recent conversation, Stalin’s biographer Stephen Kotkin told me that this would have been physically impossible. But the vozhd definitely knew what was going on there, who was arrested, whatever happened to the families of those purged. In fact, not only was Koba in the know, but he was in full control, the utimate mastermind of the social cataclysm…

Many residents and their families were detained during Stalin’s terror in the late 1930s, such that the building was dryly referred to as “The House of Preliminary Detention.” (A play on the Russian initialism Допр, from the building’s original name: Дом прави́тельства.) Fully one third of residents disappeared during the terror. The building was in fact an immense mousetrap serving the vindictive appetite of the Black Cat…

Sheila Fitzpatrick in the London Review of Books: “Yuri Slezkine, a master stylist as well as a first-class historian, is the least predictable of scholars. Still, it comes as a surprise to find that the book he has now produced, after long gestation, is a Soviet War and Peace.”

He doesn’t demand, doesn’t ask,
only his yellow stare glows.
Every cat brings him his catches,
and thanks him besides.

He doesn’t utter a word,
he just eats and drinks.
His claws paw the dirty ground
like they would scratch your throat.

One does wonder why
it’s so gloomy in our block.
We should hang a lamp in the courtyard,
but no way to collect the money.

Comments Off on Soviet Grand Guignol |

The tragic fate of liberty in Maduro’s Venezuela

Me duele Venezuela. We are all entitled to more than one fatherland. In my case, I love these countries dearly, I rejoice their happy moments and I lament their predicaments: Romania, where I was born and grew up; France, where I first experienced real liberty; Venezuela, where I understood the meanings of intellectual fraternity; and the US, this great republic of hope, tolerance, and inclusion. This is why I suffer for Venezuela and I raise my voice in support of those who, against terrible odds, defy the Maduro dictatorship. Let me also say that I’m still waiting for the enthusiastic minstrels of the Chavista “Bolivarian socialism” to spell out some regrets. Better late than never… 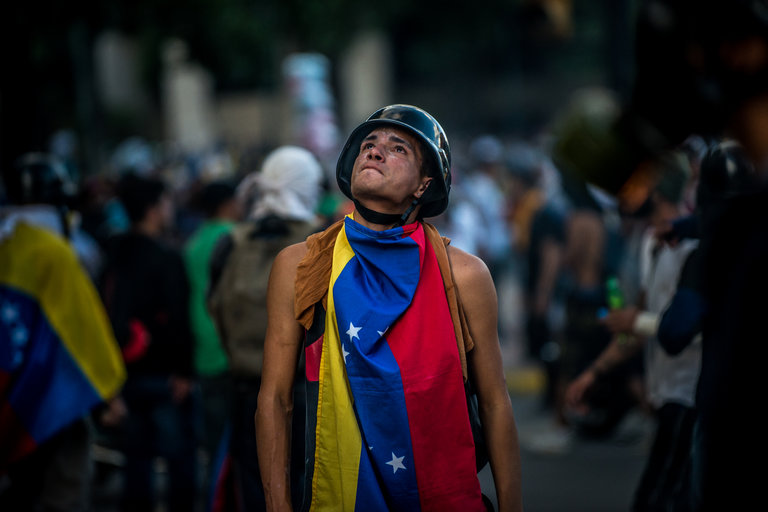